Write back in OBIEE 7.8.4/10g/11g–My First Project Attempt for Writing back in Excel via OBIEE 10g

Write back, Dashboard Commentary, Report Comments and blog type comments are buzz words for a quite significant times in OBIEE reporting world. Believe me my first project about the write back which I successfully presented in 2008 almost 5/6 years back. I have been successful to implement the right back with some of the technical notes available at that time from Oracle Development Team.

This blog is an attempt an attempt to share documentation from my knowledge base which uses OBIEE and Excel to demonstrate a simple write back using Excel and also focuses using Oracle table in later part of the document.

“Writeback” – presenting an Answers interface so that users can update data in database tables or insert new rows – first appeared in version 7.8.4. To use OBI EE’s “writeback” capabilities, there are several set up steps. While each one is simple and fairly straightforward, it’s easy to forget all the steps and where each one is located. This document contains the instructions in case you find yourself forgetting them. Since many people like to demo using Excel as a data source, it focuses first on using Excel. Later, an example using an Oracle table is also discussed.

Here’s some data from an Excel 2003 workbook. The data includes columns with three different data types: numbers, character, and dates. The data is from a named range called “Data” in the Excel workbook. 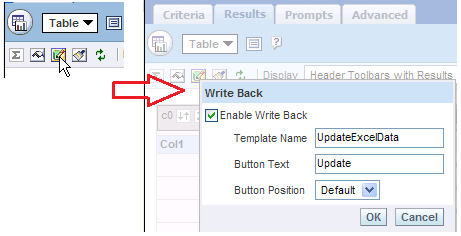 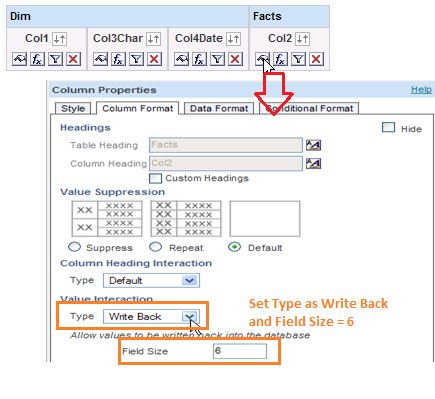 The writeback template will not be available to use until after you restart the presentation server. You have to restart each time you change the WriteBackTemplate.xml file.
Log back in and run the query.

Verify Write Back Is Working

Run the query. The existing data appears. Edit the cell whose value you want to change. The update button. 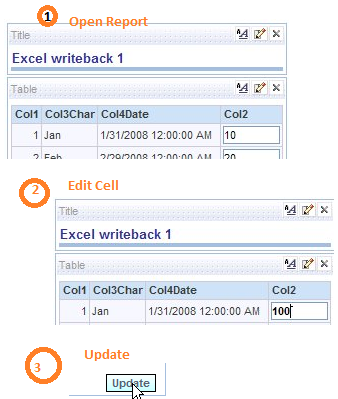 Open the Excel workbook and verify the change.

Clicking the “Writeback” button generated the Update and Insert statements, followed by a Select statement that updated the table view.

This will produce the null row needed in the table view to bring about an insert.
I hope you find this simple demonstration of the write back useful, I am not a sole writer of the contents of this blog, the relevant text is been copied from various other documents. I don’t see any reason why this writeback should not work with the OBIEE 11g with minor changes, please refer the following writeback blog for 11g.

Posted by Pravin Khadakkar at 07:47 No comments:

One of the important challenges I come across during many years of working in OBIEE APPS world is to provide of a robust, comprehensive project management technique for managing multiuser development integrated with source control.

Customers having large, complex or development teams that are not co-located often have multi developers simultaneously working on the same RPD. So challenge to make sure that development work is not lost or overwritten and it should be restorable to a previous freeze date as and when required.

1.    Administrator creates a multi-user development (MUD) folder on their desktop. This folder can be located independent of the BI installation folders.

2.    Administrator checks out the latest version of “Master” RPD from your SCM and copies it to the repository folder of your BI installation.

3.    Administrator logs into the BI application and opens the base-line version of the RPD from the repository folder in offline mode.

4.    From the Menu, Pick Manage > Projects and create new projects that are manageable in size. E.g. separate projects for each reporting area such as Finance, Procure to Pay etc 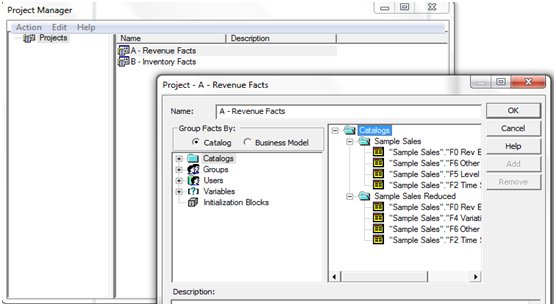 6.    After defining all the projects, save your work in the RPD.

7.    From the menu pick Tools > Options and select the More tab to set the MUD directory. 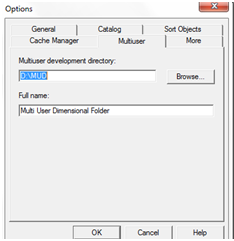 11.    After login with admin credentials the administrator is asked to pick one or more of the projects defined. Here I have been choosing B-Inventory Fact project. 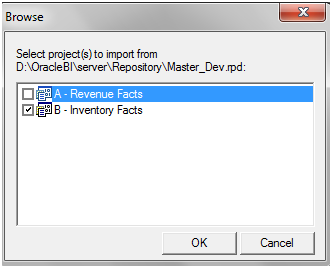 12.    The following prompt requests for a file name that should be used to save this project(s). Note: The default folder this RPD is saved to is the BI install Repository folder. 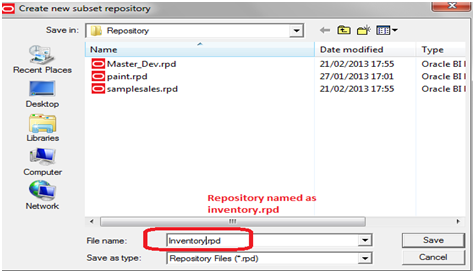 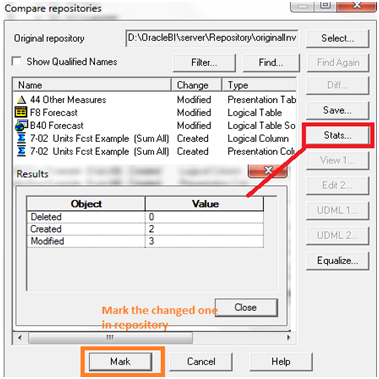