In old days of OBIEE 10g/11g there was only one option to limits output of the measure column based on one or more dimension i.e. using filters. One can use constants, repository variables, and session variables, presentation variables to drive filter conditions based on parameter selected by the users or predefined by system. The whole purpose of applying pre-defined filter is to restrict data and allows user to select parameters and drive report based on selected values of dimensions and attributes.

Recently I have been at customer site; the customer was using Financial Analytics based on OBIEE 10g, the foundation has been migrated to OBIEE 11g. One of the requirements from user was to restrict all financial data reports based on associated cost centre to the user to start with, and then user should able to drive report for selected cost centre.

Now customer decided to use the hierarchical column instead of simple attribute column in global filter and in data report introduced in OBIEE 11g after successful upgrade from OBIEE 10g.

The issue is then can we implement session variable based data restriction with hierarchical columns in OBIEE 11g rather than normal column. Customer tried different options but could not able to figure out how to achieve the desired result.

The dashboard page has a report with Time Hierarchy Column and Revenue as shown below.

The Selection Step has been set as Start with all members and option of Override with prompt has been chosen as shown. This is to make sure that the global filter values can override the hierarchical column values in the report. 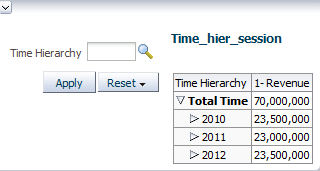 Session Variable and Hierarchical Column
I have a session variable ‘ENTERPRISE_YEAR’ defined in repository, for purpose of this exercise I have set as 2011 by changing the init block. Now what I want to do is to restrict data of the report based on session variable value. I have started looking into options on how we can do so.

First Attempt
The first thing which I have tried is to set default value of the Time Hierarchy Column based on session variable ‘ENTERPRISE_YEAR’. Unfortunately it is not supported. By choosing Default selection > Specific Column Values we can restrict the default to set value e.g. 2009, but one cannot make it dynamic by choosing session variable as a specific value. 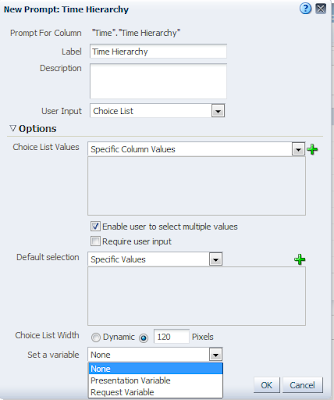 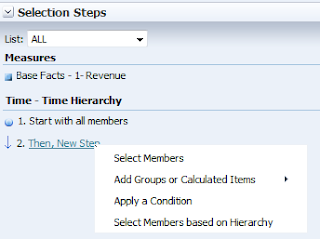 After investing couple of hours I come up with the work around. The option is to choose
Selection Steps > Apply a Condition > Choose Condition Type > Match  and then define new condition and choose option of override with session variable and write the session variable ‘ENTERPRISE_YEAR’ as shown below. 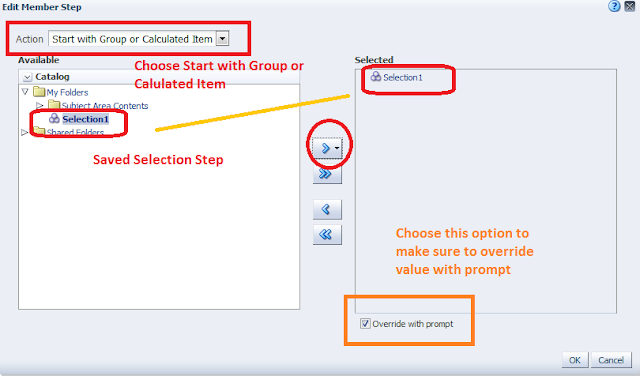 The selection steps of the report should be same as below.

Report Dashboard Page – Before and After Prompt Values

Once prompt values are selected as 2010, 2011, 2012, the output is been overridden by prompt value selections as shown below.